Ninja is one of the best gamers to have ever touched the game of Fortnite. From his gaming headphones to his gaming monitor, Ninja’s gaming setup is something we all dreamed of having one day.

Richard Tyler Blevins, known by many as Ninja, is an American Twitch streamer who loves playing games like Halo, H1Z1, PUBG, and Fortnite; and is pretty good at them as well, and aside from his godlike skills, some of his success also stems from the excellent gaming gear that provides him a premium gaming experience.

The headphones Ninja uses are the Beyerdynamic DT 990 PRO Over-Ear Studio Headphones which provide him excellent sound quality and output extremely accurate sound, and a high-quality microphone allows his teammate’s to act on the essential information from his callouts.

This article will tackle who Ninja is, what headset ninja use, his entire gaming setup, and many more.

Ninja, also known as Richard Tyler Blevins, is a 27-year-old twitch streamer living in Chicago, IL. He spent his time in the past as a professional Halo player and then moved to other games such as PUBG, H1Z1, and Fortnite.

He is known for his aggressive playing style and outstanding skills, especially in Fortnite. He became extremely popular, especially on Fortnite, and even became the most popular Twitch streamer on the platform in 2019 after amassing over 14 million followers and even 23 million subscribers on Youtube.

Even celebrities like Drake come onto the platform to play some Fortnite games with Ninja; this massive level of success enticed major gaming organizations like Redbull to sponsor the American streamer.

What headset does ninja use?

The gaming headphone Ninja uses is the Beyerdynamic DT 990 PRO Over-Ear Studio Headphones, which can be surprising to a serious gamer because they are not even considered gaming headphones but is one of the best studio headphones.

Despite this, the Beyerdynamic still provides Ninja with all the high-fidelity sound he needs to win most of his Fortnite matches. 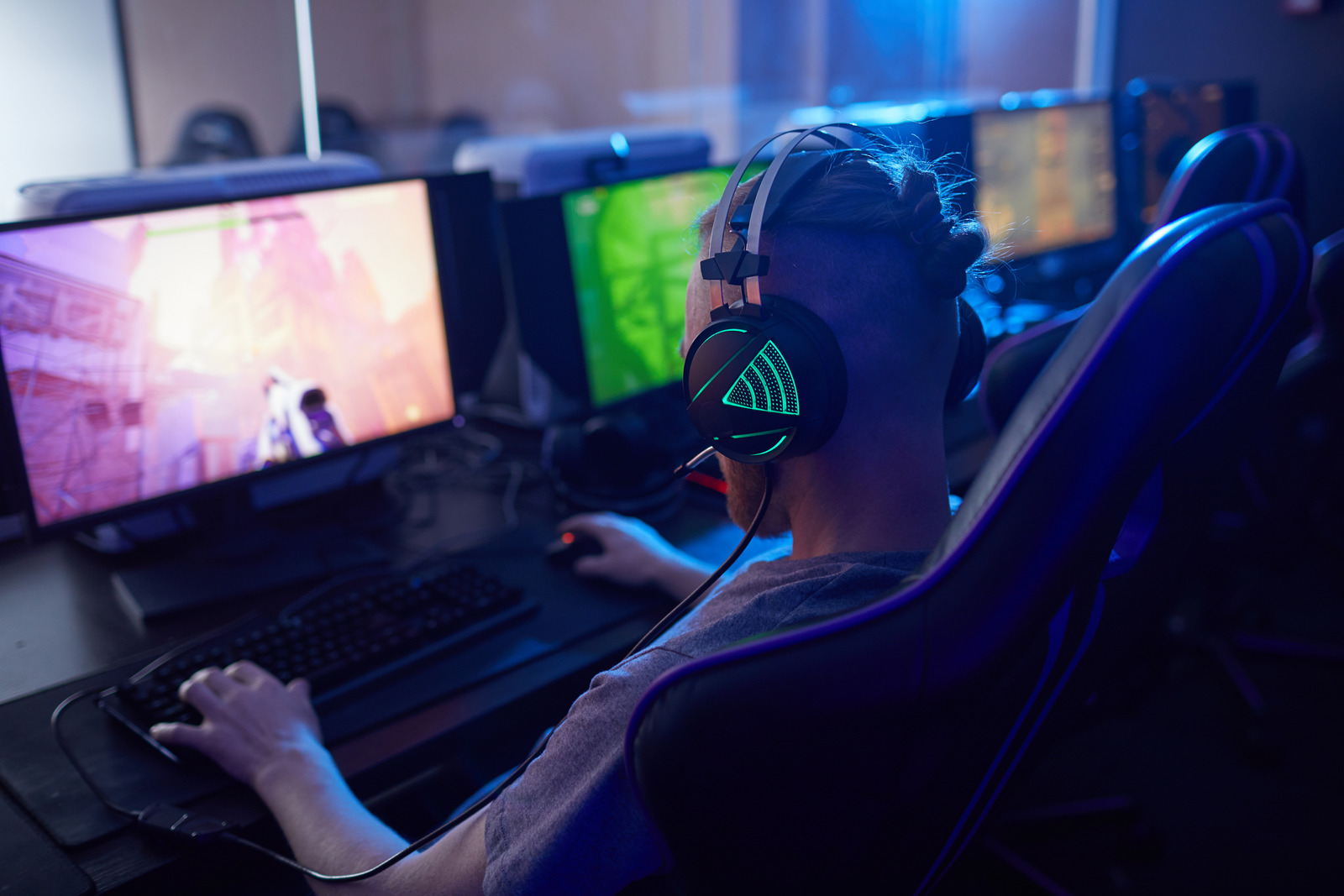 Features of the Beyerdynamic DT 990 Pro

The Beyerdynamics are also known to recreate the highly accurate sounds and are also known to have higher voice clarity. Even the slightest sounds are audible, and all the loud voices and in-game cues are produced in full resolution, high quality audio.

Although the DT 990 Pro’s don’t have excellent surround sound because of their open over-ear headphone design and do not have world-class noise cancellation, which does not entirely filter out all the ambient noise, they can still deliver precise spatial location based on the sound spaciousness provided.

In addition to this, they are also one of the most comfortable headphones as they are over ear headphones, they are light, easy to wear, have soft ear pads, and will guarantee you that they will not create headache-inducing pressure even in the longest gaming sessions.

And they are also very durable with their reinforced metal frame construction, and their strong bass makes it the best choice for Ninja out of all the headsets he has used in the past.

The only consistent complaint from most audiophiles and gamers alike is that the headset’s high-frequency range can sometimes be too intense.

While the DT 990 Pro’s are a fantastic pair of headphones Ninjas uses, a downside to them is that they don’t have a built-in microphone. This forces Ninja to use a standalone microphone named the Electro-Voice RE-20; this separate microphone allows Ninja to have the best vocal quality, making his gaming streams’ audio one of the best.

Also, DT 990s have a high impedance of 250 ohms, forcing Ninja to use a DAC or amp. The streamer uses the creative sound blaster x7, which can be pricey to some; however, if you use them, you will be guaranteed high sound quality and fidelity.

What headset did Ninja use before?

Before BeyerDynamics, Tyler used the Bose Comfort 35. The Bose QuietComfort is an excellent pair of headphones Ninja used in the past, which provided him with excellent sound quality and superior noise canceling capabilities (that’s why we also recommend this headphone for studying) which completely removed most of the background noise from his streams.

The Bose Quietcomfort was also somewhat tech-y as they have Alexa enabled voice access, which allowed Ninja to quickly turn the volume of his headset up and down without needing his hands. In addition, Queitcomfort’s dual-microphone system allowed for much clearer voice communications.

Although the Bose Comfort 3 don’t sound as good and has the same high quality performance as the headphones Ninja uses now, they are still an excellent option for gamers who prefer Bluetooth headphones.

The Audio Technica ATH-ADG1X Open Air Gaming Headset is regarded as one of the best gaming headphones as they recreate sounds accurately in-game. Its specific design also allows Ninja to be completely aware of his surroundings.

Even when you set the ATH-ADG1X at full volume, they will guarantee you no audio bleeding. And paired with a great microphone, ambient noises will not be picked by the mic, and unwanted crackles and random noises will not create frustrating feedback.

Like the Bose Quietcomfort headphones, the Audio Technica is also very comfortable with the headphone’s velour pad circumaural design. Its wing-based support system also allows users to easily adjust the angling and shape of the user’s ears.

Astro headsets have been the choice for gamers for a long time as the TR Headsets are tailor-made for them. In fact, TR headsets are the official equipment from any Call of Duty: Black Ops 3 tournament and are the headsets currently used by the Optic Gaming team.

Ninja used to love the Astro Gaming A40 TR Headset as it can be customized for playing games, game streaming, and professional studio mastering. In addition, the Astro A40 headset also has Dolby surround sound, which provides precise sounds.

The Hyperx provides excellent noise cancellation, accurate sound, and superb sound quality. With its inline sound card, the Hyperx gaming headset completely removes all the background noise and unwanted interference from your environment.

Professional gamers still encourage using the HyperX Cloud II Gaming Headset as its built-in microphone is designed to produce echoless sound, free from all random noises from your home environment.

And just like the Audio Technica headphone Ninja used in the past, the Hyperx also has the Dolby surround sound feature.

This gaming headset is also very comfortable to use, especially for glasses wearers gamers. What monitor does Ninja use?

The monitor Ninja uses for his gaming needs is the Alienware AW2518H monitor. It has a 240 Hz refresh rate which is perfect for all the fast-paced games Ninja plays, such as Apex Legends, PUBG, and Fortnite.

What keyboard does Ninja Use?

Ninja uses the CORSAIR K70 RGB RAPIDFIRE Mechanical Gaming Keyboard, which, like its name, is one of the fastest keyboards currently on the market. It features a brushed aluminum frame, RGB backlighting, 100% anti-ghosting, and retails for just $189.

What mouse does Ninja use?

Ninja uses the Air58 – Cherry Blossom Red, an ultra-lightweight mouse weighing just 58 ounces. It has 26,500 DPI, up to 5 programmable buttons, a very long battery life, and is compatible with windows or mac computers.

What is Ninja’s gaming PC?

Ninja’s PC is powered by one of the most powerful processors, the Intel Core i9-9900K Desktop Processor, which has eight cores, 16 threads and delivers 3.60 GHz up to 5.00 GHz of power.

What graphics card does Ninja Use?

What are the best headphones for Fortnite?

Since Ninja is considered the best Fortnite player in the world, what headset Ninja use will automatically be the best headphones to play Fortnite in.

The best headphones for Fortnite is the BeyerDynamic DT 990 Pro, which is considered as open over-ear headphones with comfortable velour ear pads and excellent treble sound.

What headset does TFUE use?

What headset does Pewdiepie use?

Pewdipie’s headset is the Razer Kraken Pro V2 PE, the bulky, wired headphones designed by Razer. Despite their large design, they are still comfortable and accurately reproduces voices.

Ninja’s fantastic gaming skills, aggressive gameplay, and excellent gaming setup allow him to be one of the best and most successful gamers ever in history. And if you also plan to be a professional gamer in the future, you can copy his entire gaming setup to give you the tools that made Tyle Blevins, the Ninja we all know him as.

We hope this article has helped you become informed about what headphones Ninja uses.